And that concludes 'The Infinity Doctors'.

It's not the end of the story though, not by any means. In fact if you've been paying attention to these blog posts then you'll know that we've been looking for an artist to take over from Jesse. 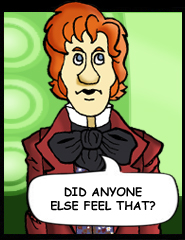 And we found one. That's his version of the Web of Caves Doctor just to the left. We're over the moon to be adding Nesshead to our team of artists. We asked Nesshead to tell us a little about himself.

"I'm an artist with a love for cartooning & Doctor Who. I'm from Pacoima, CA."

So these you have it. Nesshead has already submitted his first strip, in fact it was his audition for 'The Infinity Doctors'. We'll be posting that in the very near future. 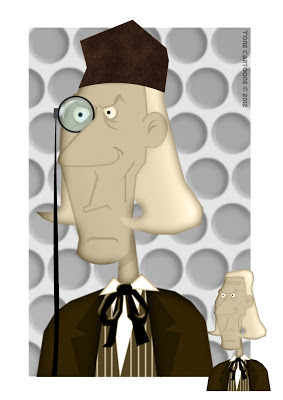 But that isn't the only news today regarding new artists and strips.

Another strip has been percolating at the back of my mind for the last couple of years and I was hopeful that I might find an artist to help bring it to life amongst the artists submitting.

Then Tone Cartoons, of The Daily Dalek, submitted.

Not just a strip (which we'll be posting at a later date), but head shots of ALL the Doctors, not just the infinity ones. Then just when I thought he'd gone that extra mile he went further, he submitted a video using his head shots. Since then he's gone on to modify and update the video to reflect the new strip we're now working on.

It's called 'The Wrong Doctor' and we'll be releasing more information on it over the current months. In the meantime you can find the trailer for it here.

Those of you that know me from Gallifrey Base may find that title familiar and if you do some digging you may encounter some clues about the premise as well as proof that it's been on my mind for the last couple of years.

But in the meantime let's give Nesshead and Tone Cartoons a warm welcome to the In Print team!