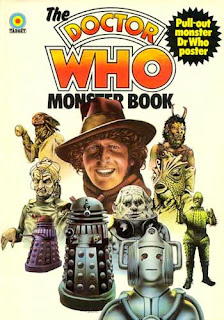 Hey, Mike here.
Today's strip is a further Who spin on the "Whack a spider" recurring joke from the cartoon our strip is humbly based upon. 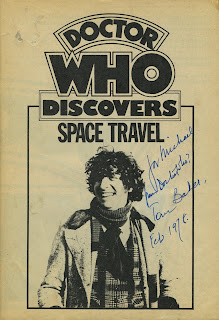 I remember watching The Hand of Fear on it's original UK broadcast as a 6 year old back in 1976. It was my mum who introduced me, she looked a lot like Sarah Jane Smith, and Sarah's departure, being dropped off in the street, in the wrong town is forever engrained in my memory. I think it must have been my first experience of the show as I don't remember watching the shows before it but do remember the shows after it: The Deadly Assassin, The Robots of Death. Well I do remember having watched The Genesis of the Daleks, The Pyramids of Mars and The Brain of Morbius but they must have been repeats..?
Not long after that I got my first Doctor Who book at a jumble sale, The Book of Monsters, which I read from cover to cover and inside out, I wish I still had it.

It was the year after that that I actually met The Doctor, at John Menzies in the High Street, a signing tour for the Doctor Who Discovers range of books, now I DO still have that. It was also the first of many autographs and the start of this lifelong passion.

I hope you enjoy today's strip and maybe it will trigger some long lost memories for you too...
Happy times and places, Mike