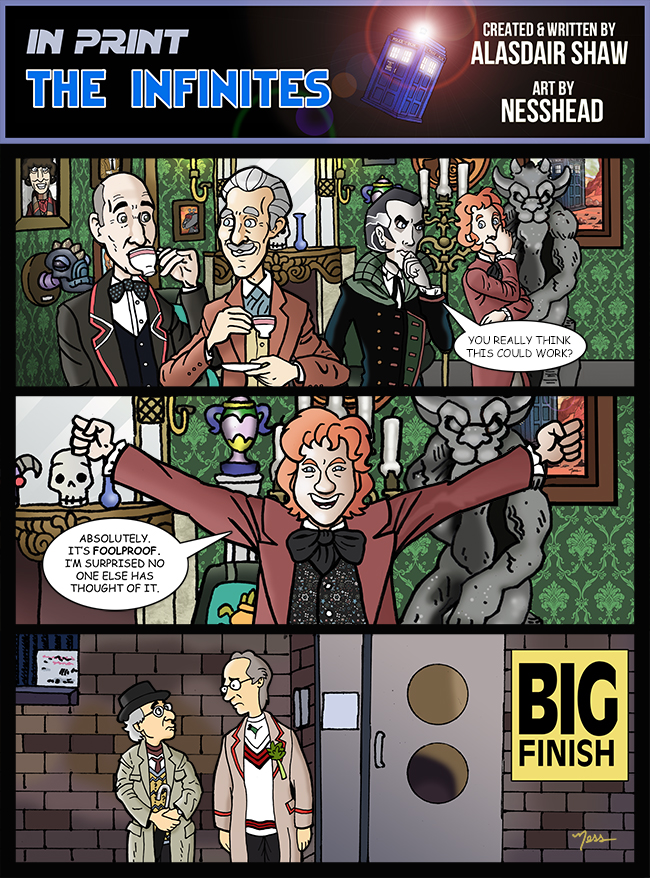 Actually I've been meaning to come here for a while, but you guys are going to have to wait until next year to see why and what's going to happen. I've written a good chunk of the Big Finish outing, but haven't had a chance to type it up and send it to Nesshead yet.We're in the process of planning out the Christmas schedule and then I hope to spend tomorrow afternoon typing up scripts for the three strips and getting a writing buffer back into place properly.

And yes I'm aware Colin Baker is missing. It's not an accident. You'll discover why in time.

Although I was a little disappointed that it wasn't the pure single hander that we'd been promised it was still an utterly outstanding performance from Mr Capaldi and I can't wait to see what happens next. Although it strikes me as odd that when 'The Impossible Astronaut' aired that the Moff insisted that one of the main cast was definitely going to die and then didn't, but this time around the Doctor was killed repeatedly and properly yet no one mentioned it in the build up. I'm very glad they didn't, would have been a hell of a spoiler, but still, strange.

And yeah, the Infinites seem a little more finite now. That was a serious amount of skulls floating in that river.

Anyway, I'm off now. Looking forward to tonight's finale and also the the finale party that the Glasgow Doctor Who Society are throwing at the Flying Duck tomorrow night. Catch you all soon.