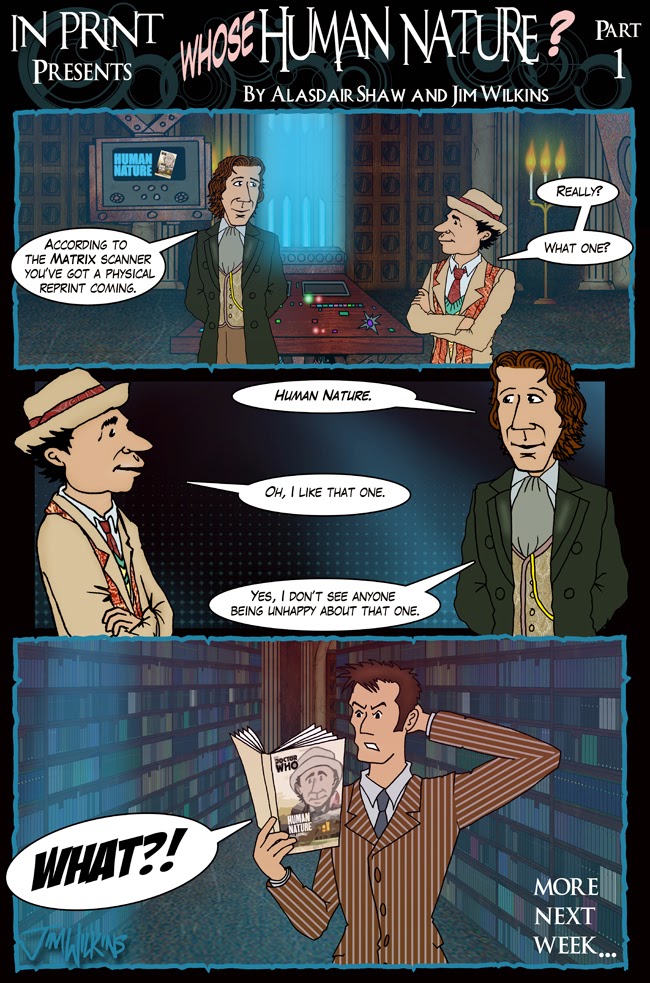 It doesn't happen often, Jim and myself have been putting In Print out for four years now (as of this week) and we've rarely argued about anything to do with the strip. Sure there's been times when we've disagreed about certain elements, but we've always managed to discuss things in a civilized and friendly way and devise a solution that keeps everyone happy. In fact sometimes I forget that Jim and I have never actually met, we've not even talked on the phone. Our entire working and personal relationship is carried out through Email and text messages. Something we really should correct at some point since I've come to regard him as a good friend as well as a colleague.

But I digress. I usually do.

This week was different though. As I mentioned last week the name of this arc has been giving me trouble. Turns out it's been bothering Jim as well since he texted me yesterday with a bunch of suggestions and I replied with some of own. Things weren't heated, but we were definitely at a stand off, we just couldn't agree on a title and then my phone died. By the time I'd got my kids to bed and got some charge back into the phone Jim had found a solution to our predicament that fitted the actual story arc quite well. Unfortunately he'd suggested it right as my phone died, so I was worried he'd think I was ignoring it. Didn't help that I sent another suggestion before Jim's solution was actually delivered. More about that next week, in the mean time the adjustment to the title arc today was Jim's suggestion.

Anyway, I love 'Human Nature', I like to view the televised version as a reprint of sorts of the book form. Both pack an emotional stomach punch that always makes me sad that we've not seen Paul Cornell in these parts since. I would love to see him writing for the 12th Doctor, Capaldi seems to have sprung straight from the NAs and I can think of few other writers better equipped to write him in that style.

Anyway, time for me to go. See you all next week.