THE PROP CUPBOARD OF OBSCURE DOOM... 7 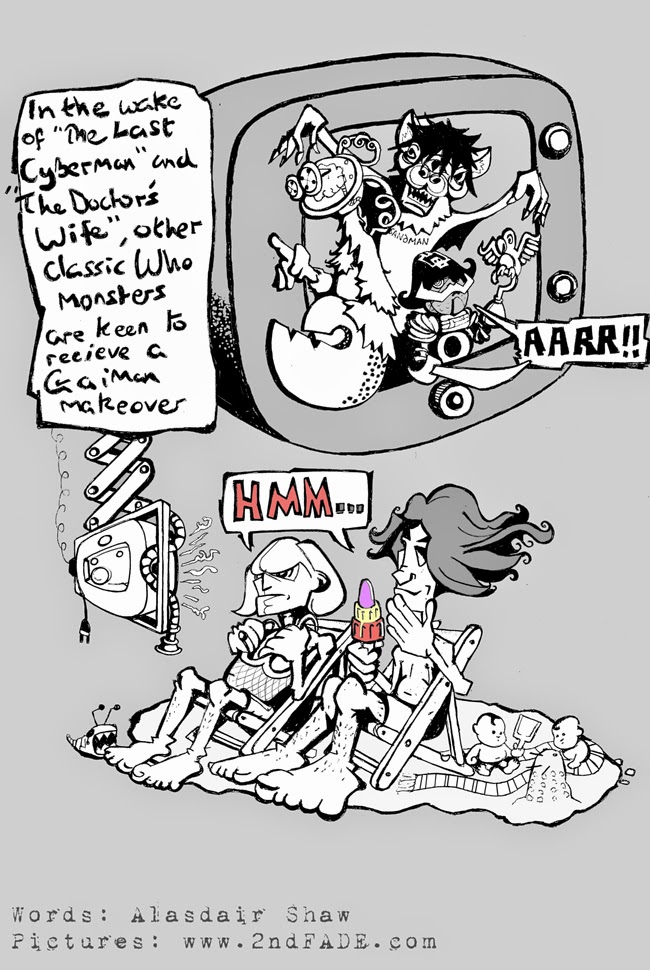 And we're back in the Prop Cupboard, it's been a while hasn't it? In fact I need to get more scripts sent over to 2ndFADE, it's far too long.

I try not to be a dictator in regards to our output, whilst I have an overall plan for In Print I usually try and accommodate the different members of the art team when they ask to draw certain characters and monsters. Sometimes it's a cameo and sometimes it results in a whole arc I hadn't initially planned, but ends up working it's way into the grand plan.

There's a slightly different with 2ndFADE. The scripts form over a series of Emails as we discuss different aspects of who and at some point an amusing scene will occur to me that we then working on filling with little details.

Little details aren't always run past me. It's nice to see Nuala and Alfie again for example! Thanks, 2ndFADE.

Of course when we first put this one together 'Nightmare in Silver' was still called 'The Last Cyberman', we never updated that as I quite frankly prefer the original title. I'll be interested to hear in the comments section if you guys can place all the Gaiman references.

You can find more of the work by 2ndFADE here at his website -  www.2ndfade.com

Nesshead is back next week. It was his birthday yesterday, you should all drop over to his Facebook page and wish him a belated happy birthday.

Speaking of next week, any guesses as to where the War Doctor will end up this time?