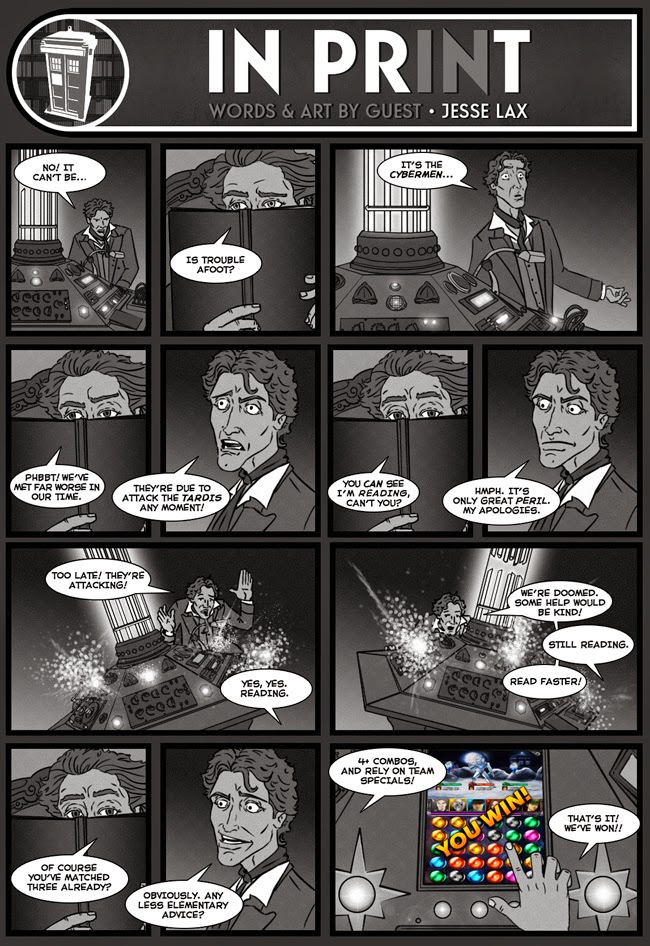 So it would seem that the Doctor is just as addicted to 'Doctor Who Legacy' as the rest of us. Not a surprise really.

Today's strip is brought to you entirely by Jesse Lax who wrote and drew this strip before leaving it in out shared Dropbox folder where it took me two months to spot it. And seeing as Legacy released it's first major update this week it seemed like a good chance to show it off.

I have to admit when I first read about 'Doctor Who Legacy' I really wasn't convinced. At all. Sure the art looked pretty, but the concept sounded like a dull combination of those repetitive turn based RPGs and Candy Crush, so I stayed clear for a while. However now that I've started I can't stop playing and it'll surprise no-one here that I've been playing using the 7th Doctor. I'm hoping in time to collect an In Print based team. Sadly there are no plans at this time to release the Valeyard. Yes I Emailed and asked, don't you guys know me by now?

Jim returns next week with a new arc. Not the arc I initially thought it was going to be since I wrote the next two arcs in the wrong order, but that's getting fixed up in post production as it were.

I'd like to remind you all that we now have a Facebook group for In Print. Please come and join us as it's the only way to be sure to receive updates on the strip.