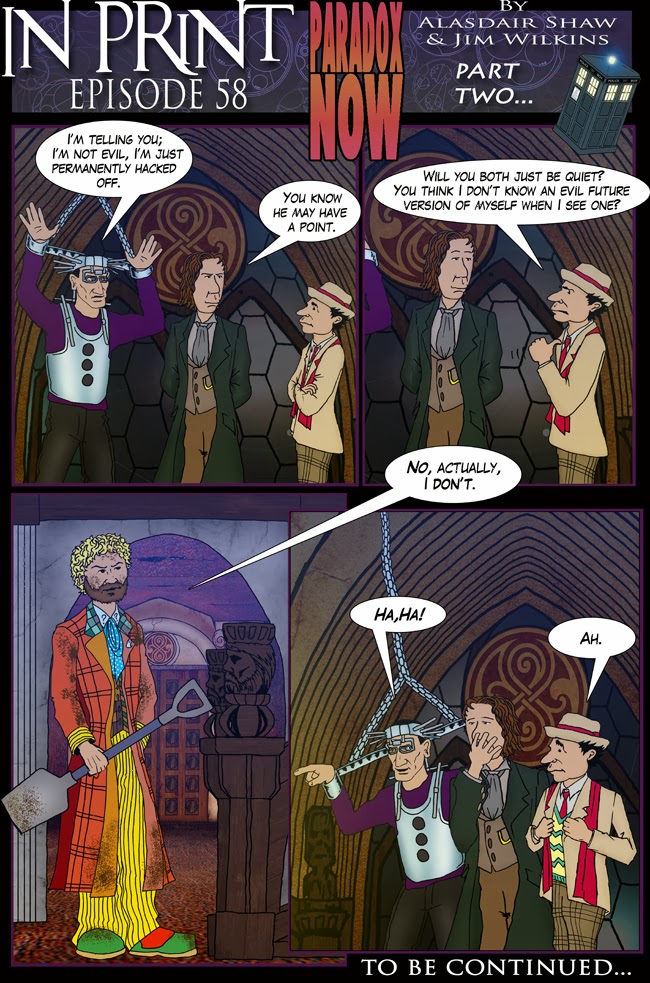 Right, so you ight have noticed that this isn't the next instalment of The Grand Tour fro The Infinites. You're right; it isn't. Nesshead has been having problems with his mouse pad and is a little behind schedule. I can relate; my 'm', comma apostrophe and @ key are all broken and I'm having to use the On-Screen Keyboard to access them. It's a really annoying issue.

So instead we have the next instalment of Paradox now instead and we've invoked fan service and continuity as a result. Colin Baker's beard was a fan request. These are written and drawn in advance so I forget who exactly asked for the beard -I tried looking back over past conversations with Jim, but we text/Email/PM quite a bit so it's a bit like searching for a needle in a haystack- but I' pretty sure it was one of the two Steves. The Two Steves (who needs The Two Doctors?) are pretty active on our Facebook page and when one of them suggested we should use Colin Baker's beard in the strip we felt it was only fair to oblige, also it was a pretty good way of differentiating between Six and the imposter.

We saw Six making his break for freedom a short while back and we've been hinting for a while that the six that had been in the strip from the beginning wasn't all he seemed. This revelation puts this strip in an entirely new light I feel.

I started a new project this last week. I've started planning a book. The plan, at this stage, is that I'll write a book about the non-canon Doctors, a guide really. I'm quite excited about the idea and I'm currently working on putting a pitch together for it. The chapter summery is already in place. So if any of you happen to publish Who non-fiction books or some one who does then feel free to get in touch...