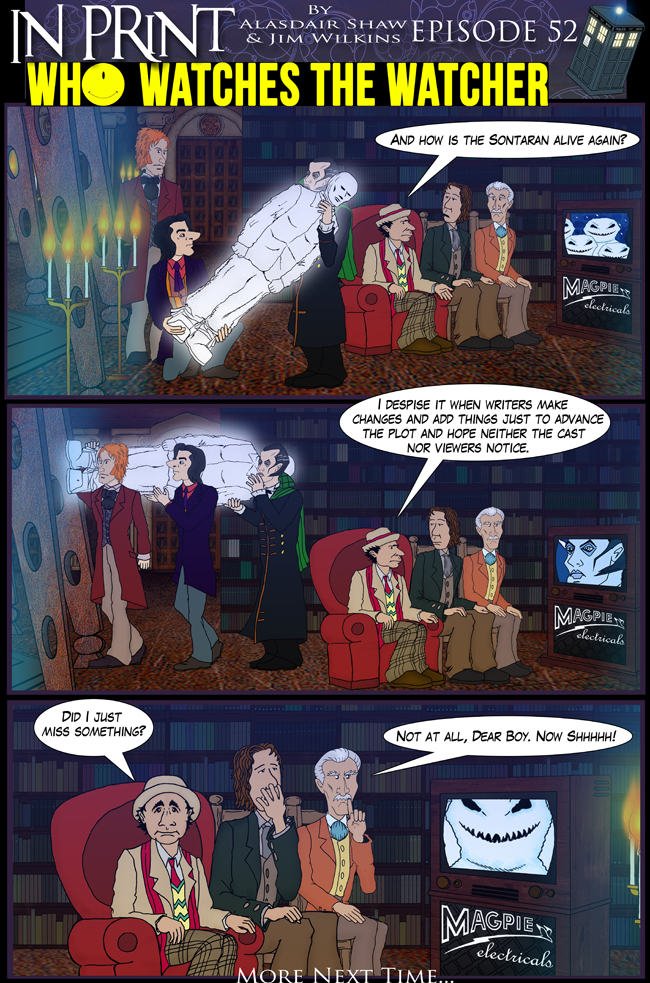 Of course this plot point has since been addressed in one of those ever popular minisode type things that see to be growing in popularity. But still, that's not what's really important in today's strip. I love the way the Watcher doesn't even change his pose slightly as the Infinites cart him away into the crossover finale, which incidentally I only Emailed to Nesshead a few hours ago, so it might not be ready quite in time.

Totally my fault. I've had some pretty serious personal stuff going on the last month or so and I've not had the chance to finish off the last script. Luckily though the rest of the scripts are written up until November, so that's that particular panic over. No. Wait. I still need to give 2ndFade some more scripts for the Prop Cupboard.

Speaking of the various strips I'm in the process of putting a reading guide together and updating the previous and next buttons so that you can read the strip as a whole a lot easier. That was due last month, but took a fair bit of a hit as well. Which begs a question, would you guys prefer the buttons at the side took you to the latest version of each strip or are you happy with the taking you to the first? They're there for your benefit, so let us know which you'd prefer. 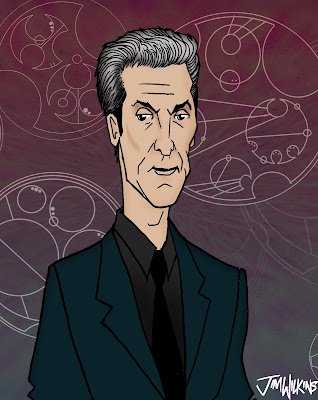 So, yeah, in other Whovian news we seem to have a new Doctor. As you can see Jim has drawn him already and its making me even more exited about Peter Capaldi taking charge of the TARDIS. I'm pretty damned excited about this bit of casting. I had resigned myself to a younger, less well known (but talented given the most recent evidence) individual taking the role. It wouldn't have been terrible news, but I have been missing the days of the slightly older Doctor. Mind you I am going to miss Matt Smith, he has brought a real feeling of an old man in a younger man's body to the role and if he has to go then I'm very excited to see an actor of Capaldis calibre stepping into his shoes. Its also nice to see a Scot in the role again, but I'm a little biased that way.

I haven't seen Malcolm Tucker by the way. I totally missed that at the time, although Ill be catching up on that very soon. My experience of Mr Capaldi comes by way of Local Hero, The Angel Islington and Frobisher from Torchwood. We have a nice little penguin joke brewing, but you'll have to wait for that.

Yes, In very excited to see what happens next. Especially as there's been a few hints that we might see his Doctor alongside the John Hurt version. We might not have had as any episodes as we would have liked this year, but we really cant complain about the number of Doctors or the men playing them.