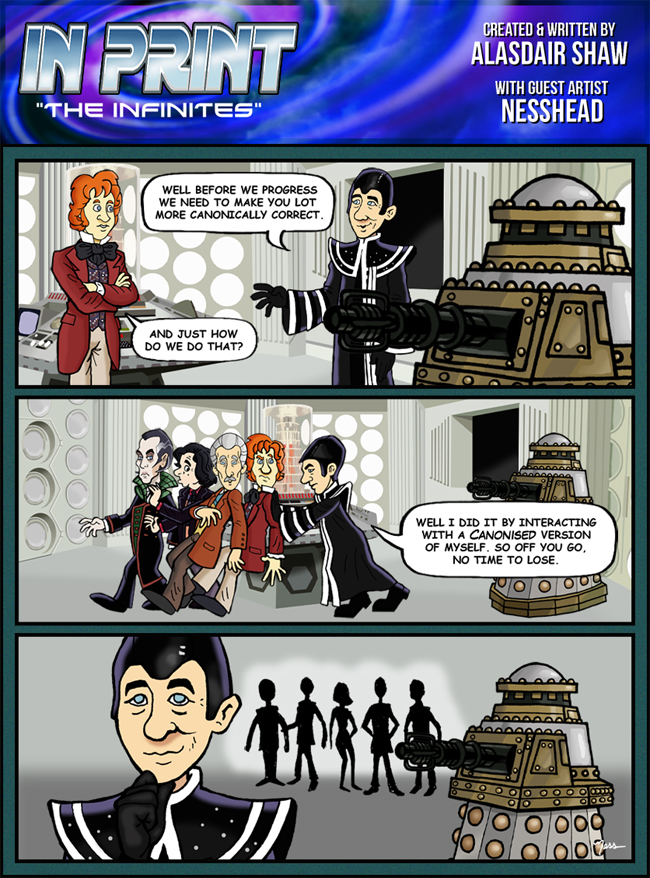 And here we go; the latest Infinites. Nesshead has been working on this pretty much constantly the last few days, in fact I'm pretty sure he hasn't even slept yet. This strip was due last week, but due to a hardware fault Nesshead found himself without his computer, so Jim stepped in with the strip that was due in today. There should be another Infinites next week as the strips need to both be in a certain place so that they're ready for their crossover.

A crossover? Yes, we're going to attempt a crossover of the strips. Now don't worry if you only tend to read one of the strips (although why you would is beyond me, their both a lot of fun) they've been written so that they read just as well separately as they do as a whole. I hope you're taking notes Marvel and DC.

As for the strip itself; I'll apologise now for the lack of punchline, but I needed to progress the story in this one and that meant introducing the five shadows in this particular strip. Who are they? Well I'd like to hear your guesses, I'll neither confirm nor deny until next week, but I'm really looking forward to seeing these guys in the strip.

In case you're wondering the Valeyard just referred to 'Trial of a Time Lord'. It can be argued that it was the Valeyard's interactions with the 6th Doctor that cemented his place in the Doctor's timeline. Until the trial he was merely a possibility, one of many. It's an argument that I'm certainly convinced by and it would seem that the current production team on New Who feel the same way. I wonder if Michael Jayston could be convinced to come back..?

Anyway, I should get going. I'll leave you, as always, with links to our Facebook and Twitter pages. I'l also remind you of the 'Donate' button at the side of the strip. If you fancy donating to Nesshead's repair costs then click and leave a message in the notes. The same goes for myself, Jim and 2nd Fade. There's always items and costs that go towards putting this strip together.

Anyway, enough hinting. See you all next week.