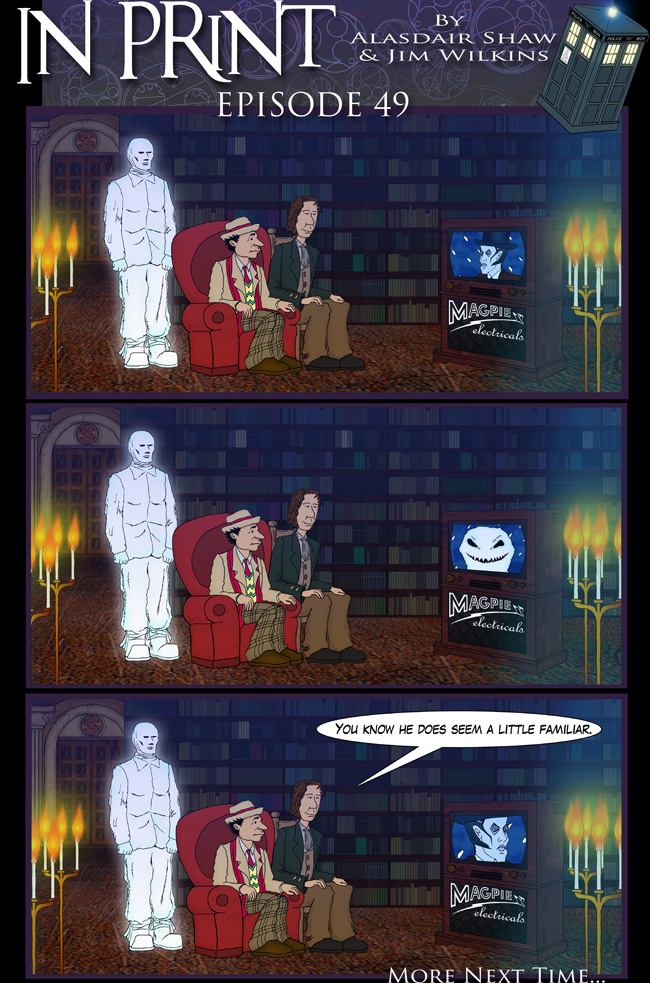 This joke was funnier before the 'The Name of the Doctor'. Oh well.

It's also meant a complete rewriting of the Infinites November Special. You'll see why once it begins unfolding. I'm having a lot of fun putting it together and Nesshead is getting to cut loose, which he seems to be enjoying. We're pushing things with the In Print November Special as well with some scenes that Jim is getting pretty excited about drawing, the previews that have hit my Inbox already have been pretty awesome. But the thing that has me really excited about November is the fact that we're hoping to go daily for a fortnight, with the 23rd right in the middle.

Yeah. We've been working hard to build up buffers just so we can kill them stone dead in a couple of weeks. It's going to be awesome though. I promise.

We'd love to do that all year round, but we simply don't have the time. The art is time consuming for Jim, Ade and 2nd. They all give up a lot of their free time, which they don't have much of between family lives and working. I'm very much in the same boat, although writing a strip isn't as time consuming as drawing it, I still need to plot ahead, coordinate strips and crossovers and make sure the while In Print Verse works as a whole. I love it, we all love it, but it's time consuming. The real problem about doing more In Print is that we can't afford to give up our jobs and given that the BBC own the copyright to our characters it makes marketing them pretty much impossible. I've been looking at running a few subtle advertisements on the page, but most interested parties make a break for it when they realise that we'll not officially sanctioned by the BBC. As it stands we have a few products in a store that try and steer away from copyright issues and we have the donate button. As it stands just now the site couldn't support one of us let alone all of us. So it's going to be weekly strips until one of us wins the lottery.

There seems to be a new person watching that Magpie Telly. I wonder where we've seen him before?