THE PROP CUPBOARD OF OBSCURE DOOM... 5

When 2nd Fade Emailed and said he had an idea for one of my scripts that would only work as an web comic he had me curious. He was right though, wasn't he? 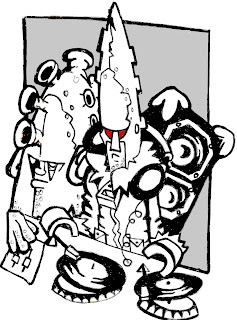 We've seen the Watcher before of course, I wonder if we're building to something?

I love the Watcher, he's one of the biggest mysteries of the show's run, yet so many people don't know him. A slightly future Doctor that helped the 4th Doctor regenerate is a pretty timey wimey concept and would sit perfectly in amongst the Moffat directed time twisting. I doubt he'll be back for the 50th, but the Prop Cupboard seems to have a pretty good track record of using monsters that are about to get used in New Who.

Speaking of New Who, I've really been enjoying the last few episodes. I mean it wasn't a strong opening couple of episodes, but they've really warmed up and I especially enjoyed seeing the return of the Ice Warriors and David Warner, I really enjoyed his portrayal of the Doctor in the Unbound series. In fact between him, Richard E Grant, Derek Jacobi, Mark Gatiss and Arabella Weir a few Christmas' back there's been quite a few of alternate Doctors being used, albeit in non-Doctorish roles.

Personally I'm hoping for a Rowan Atkinson guest role at some point.

Anyway, next week we have a Jim Wilkins strip. It might be the regular strip or it might be an Extra that I've come up with given Who news in the last week or so. The week after that sees the return of Ness and the Infinites (there's a TV show there!), but don't fear the Prop Cupboard will return. It's kind of like James Bond that way, but with more Ice Warriors.

Our numbers have been pretty spectacular the last month and we here at In Print would like to thank each and every single one of you that helped us get quarter of a million views in the last year.

It's all pretty humbling.

See you all next week and in the mean time you can find us on Facebook and Twitter.