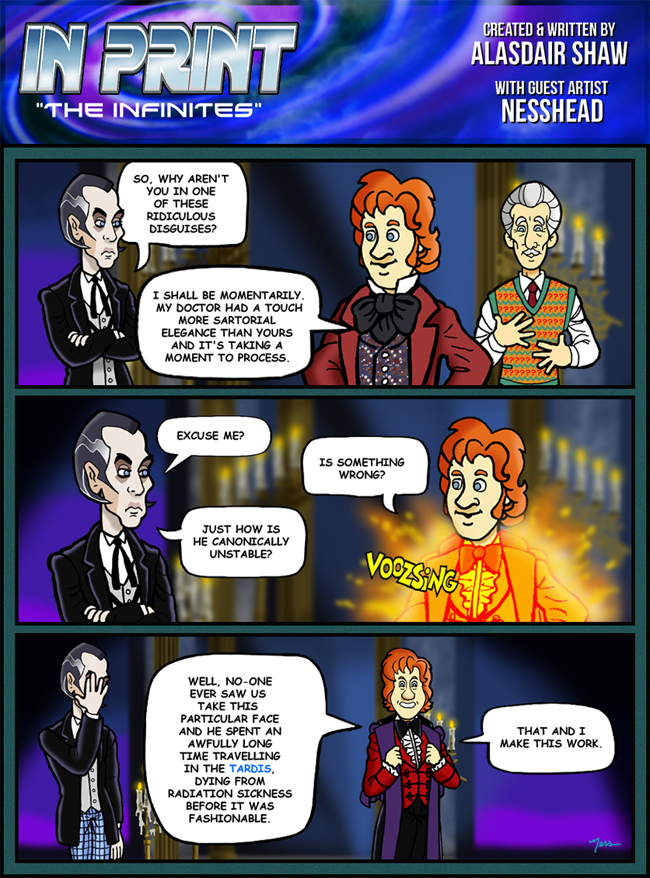 VOOZSING! We're back this week with The Infinites part 3. Nesshead's been busy this week with the strip and also his entry to the Design a Doctor competition over at the Doctor Who and the Tardis by Craig Hurle page on Facebook. Go give him a vote with a like on his picture now!!! Alasdair's still away from the site this week as he and his wife had a lovely baby daughter last week. Al will be back next week so you'll have to put up with me again (Jim). Next week the main In Print Comic is back with a new run taking you right up to the Doctor Who 50th anniversary and we've got plenty of fun and thrills coming up in the coming months. We'll be bringing you some classic and obscure characters from the wider Whoniverse. Also there will be a new look to the site, change in logo.. after all we're almost two years old now ourselves! Today is also our 100th post, more cause to celebrate!
Don't forget to 'Like' us on Facebook and follow Twitter,.. spread the word! We'll be back next week but look out on Facebook in the mean time for updates and a exclusive picture or two. Plus I'll updating In Print's Tumblr with photos and art too.