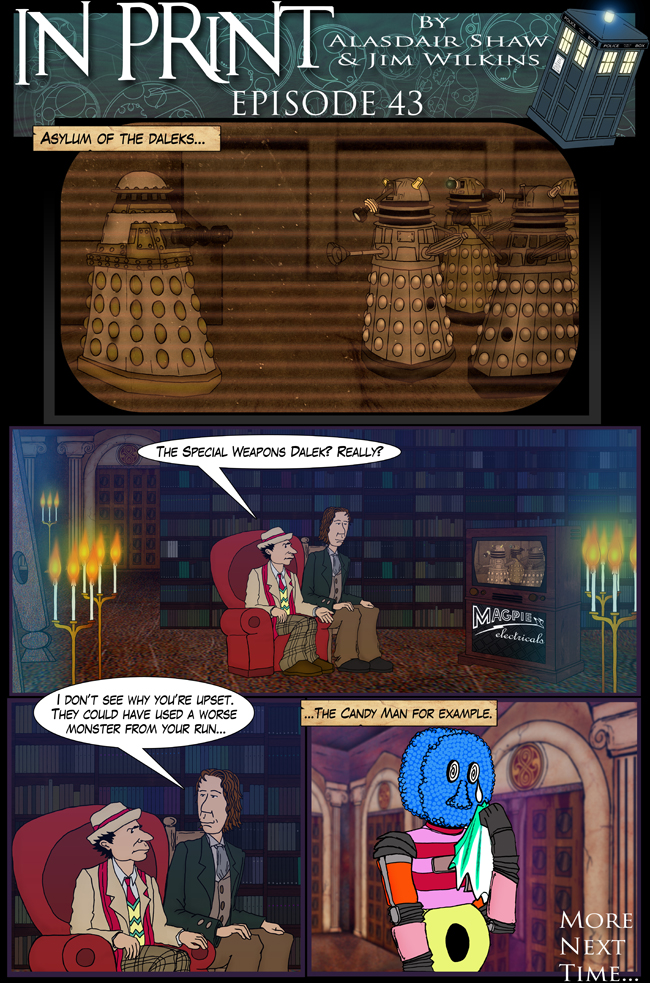 And back to normal. Such as that is.

Today marks the end of Paternity leave for both myself and Jim, which is why you've just read strip 43.

Today also sees a return to the original format with our protagonists watching a recent episode of New Who and commenting on it. For those of you who might miss the more arc based strips; worry not for we'll be back to them in the fairly near future and if you can't wait there is always The Infinites.

But this isn't the only way we're going back to our roots, oh no. The arc after next will feature a character only ever seen in the books, although variations of him have appeared in the Classic and New Series. Without giving too much away; there isn't much original art out there featuring this character so Jim and Nesshead have been working on a slightly redesigned version. And while the boys are working on an In Print rebrand for him I've been writing his story, which'll take us all the way up to November.

We have a little something planned for you in November and as such we won't be doing a Christmas Special this year, but I think you'll find this a fair swap.

Oh and Jim's been redecorating. It works well with our book roots doesn't it? We;d love to hear your comments on it.

Anyway I best be going, neither myself or Jim are overly awake just now and sleep beckons.....

You can check out our Twitter or Facebook feeds if you miss us before we wake up.