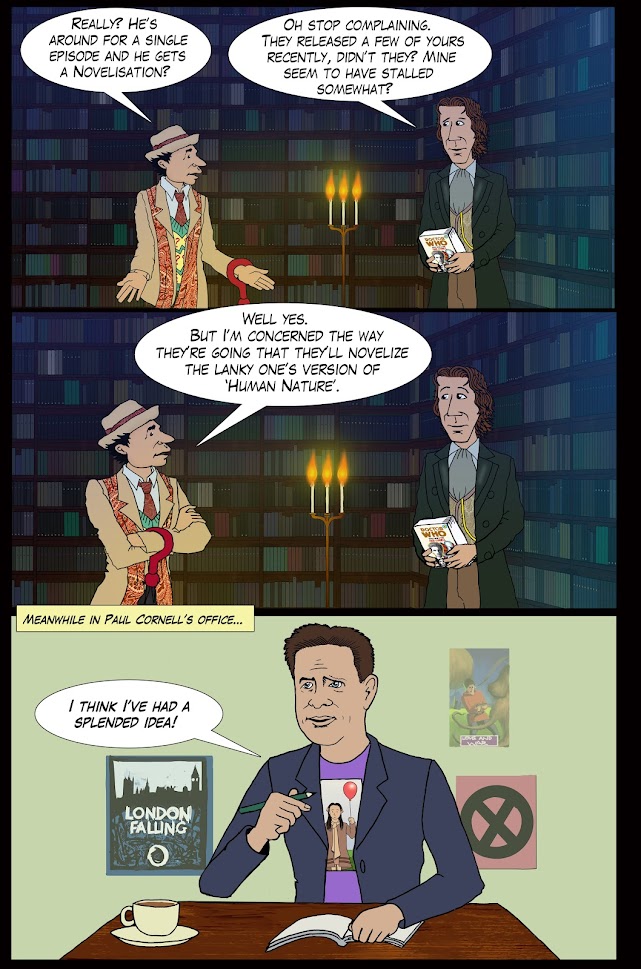 Previous Strip
We did get a few New Adventure reprints, albeit in re-designed covers that might have upset people trying to fill the gaps in their bookshelves. I picked up the new edition of Human Nature anyway. A site that I used to work for sent me a copy of Battlefield which is an NA in all but name, it helps that it introduces the NA version of Merlin.
The BBC reprints of the EDAs were Print On Demand, so I suspect that was why their releases dried up. That and the complicated manner in which the rights of the authors/BBC/creators were legally split. Still it allowed me to get a whole bunch of Lance Parkin gaps in my collection filled. I console myself about the lack of Cold Fusion reprint with my copy of the Big Finish version.
Of course this strip is addressing the continued release of the New Target range, which has continued to be a delight. Twice Upon a Time as adapted by Paul Cornell was proper nostalgic read, quite the trick given it was released right on the heels of it's televised version.
Which has me thinking that I should maybe try The Witchfinders as it seems to be the only 13th Doctor Target out there. I'll let you know if I do.
I am genuinely waiting for Paul Cornell to adapt 'Human Nature' into a New Target, I think it would complete the circle nicely.
We wait with baited breath,
Two bits of sad news this week.
David Warner is a sore loss regardless of what kind of fan you are. I especially enjoyed him as HG Wells in 'Time After Time' and enjoyed seeing him as Jor-El in 'The New Adventures of Superman'.
But here in The Print 'Verse it's his version of the Unbound Doctor that we'll remember him for. 'Sympathy for the Devil' remains a high point in Big Finish's catalogue and Warner thoroughly deserved being spun out into his own ongoing series. I'm going to miss that ongoing series and the release of his 60th Special along the 9th Doctor will be incredibly bittersweet now.
Speaking of bittersweetness and the 60th; we are all heartbroken here about the loss of Bernard Cribbins. Even before he took the part of Wilf he was an integral part of our childhoods. It's hard to convey just how much the Wombles mattered to us as a generation and the world seems a little harsher without Uncle Bulgaria,