The relationship between Ten and Jenny continues this week, but probably not as Jenny expected...

Have our readers ever tried fish fingers and custard? I have and it's actually not so bad, in fact it's become a Father's Day / birthday tradition in our home, yes my friends and family all think I'm weird too... 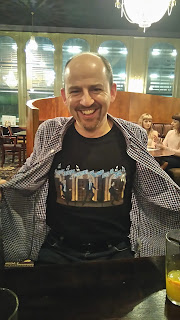 And Al here. I know I've been kind of absent on the blog of late. There's a few reasons for that, but you guys really aren't interested in that.

But I'm back. The guys have all been given scripts and the buffer is being restocked. There are also significant changes afoot with regards to my other Who writing, but that's still a little hush hush for just now.

My biggest bit of Who related news this week is actually from last weekend. As I've mentioned before I've been going along to meetings of the Glasgow Doctor Who Society. They're a pretty fun bunch and it's great fun getting to know them. But last Sunday was especially memorable. Usually when David starts undoing buttons it's time to drink up and head home, but this time it was to reveal that not only had he been reading the strip, but he'd also been looking through the store. I've never met anyone wearing one of our shirts before, I have to admit to being slightly overwhelmed by it. In a cool way of course.
The next meeting is next Sunday at 6.30 at the Crystal Palace if any of you are in the area and fancy popping in.