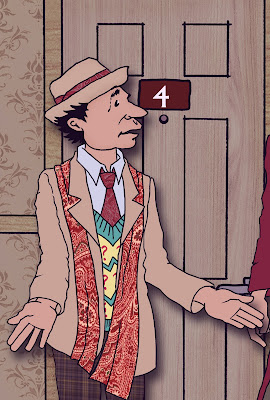 We're fast approaching the 100th strip. Well the 247th strip if you take into account the Infinites, Prop Cupboard, Who's Cat, Guest Prints, the extras and of course the Christmas Specials. But it's the 100th main strip, the strip that started the whole ball going. I read once, somewhere, that the average length of a web comic is somewhere around the 30 strips mark, because that's when the creator exhausts his ideas and enthusiasm for the project. So it's with more than a little bit of pride (mostly in the rest of the team, especially Jim) that we seem to just keep going and have only ever missed one Saturday. Although to be fair it was over Christmas...

Today's strip serves to highlight the range of characters we've had on here as well as point out how much of a continuity we've built up. And Jim's chosen to homage Lee Sullivan's 'The Usual Suspects' to highlight our rogues gallery. That made me smile.

I should really try and write the 101st strip before I get cocky though.

I really, really enjoyed 'The Zygon Invasion', it was nice and dark and once again the two part structure allowed for the tension to be cranked up significantly.

I won't be at the Glasgow Doctor Who Society this week due to prior commitments, but you should still go along anyway. They've just posted a video of various members (including myself) talking about 'The Woman who lived'.

See you all next week.