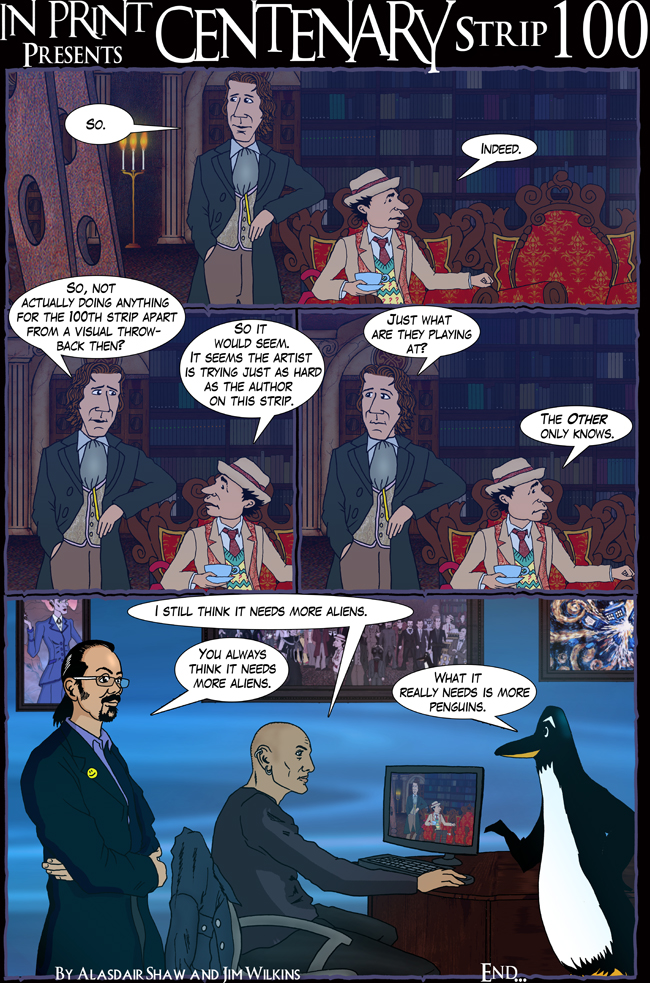 This strip has always been a little bit metatextual, but we thought we'd push things just that little bit further for today's 100th strip. 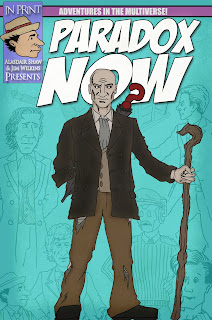 In case you're wondering the gentleman in the chair is our very own Jim, not Grandfather Paradox. Though the resemblance never struck me until Jim posted the Paradox Now cover in the blog section...

So, you should be able to work out that the person behind him is me, myself and I.

So, yeah, this week the Doctors are criticizing us rather than their modern day counterparts. I think it works.

I'm starting work on the next set of scripts for Jim and Nesshead has been sending some fun stuff in for the Infinites, so we should be in a good buffer zone for 2016. Although the fact that we're still running as we reach the 100th main strip is something that fills me with a quiet sense of satisfaction and achievement. 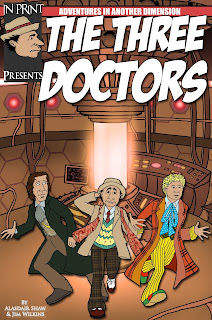 It's at this point I really have to say a big thank you to all the In Print artists (who have all become my friends) for letting me bring my first few ideas for a series this far.

Regulars Nesshead, 2ndFade and Mike Key for helping to expand the Print Verse beyond Plan A. You guys have been fantastic and I can't thank you enough for the feeling of family you guys have brought to proceedings. Nesshead's run on the Infinites has been a wonderful way for me to explore my favourite alternate Doctors. 2ndFade is covering Christmas duty this year folks, wait to you see what he's come up with. Mike went from recurring guest artist to one of our regular artists this year, and pulled our collective fats out of the fire.

Recurring guest artists Jesse Lax and Paul Salvi for indulging my tangents and illustrating them. I look forward to the day where I can work with them both on a more regular basis. Jesse has been a collaborator and friend since before In Print began and I've lost count of the hours we've spent discussing the more obscure elements of Whovian fandom. The Infinites began when I asked Jesse is he'd read 'The Infinity Doctors'. Paul was the guy that finally got me to stop being the guy who had an idea for a webcomic to being the guy who wrote one. I can't wait until he feels ready to come out of his Bill Waterson state of retirement.

But the biggest thank you has to be to Jim. Seriously dude, that's 100 strips we've done together. 100. I don't think either of us were quite prepared for how long we'd be able to keep this thing going, but that's 100 and I'm writing more as we speak. Despite the above scene Jim and I have never actually met or even spoken on the phone. Yet we've formed a friendship that goes beyond our involvement in the strip and given the ups and downs we've both had in the last two years I don't think the site could have survived without that. At the risk of being overly sentimental; about 100 strips ago I went looking for an artist. I found a friend as well.

A quick nod to Paul Hanley who has kindly let us borrow his utterly fantastic designs over the years and with whom I've shared more than a few Emails discussing alternate Doctors. It's been a blast man and I hope one day I can persuade you to either write or draw (or both) a guest strip for us.

Another thank you is to you guys. Our readers. In particular Lynsay and David at the Glasgow Doctor Who Society. I know you guys exist because Blogger gives me stats to confirm your existence, but Lynsay and David are the fans (and friends) that I've actually met. I knew I was going to get on with David when he casually mentioned that the only Doctor he could cos play was the Nick Briggs one.

One last thank you is due, this time to Christian Cawley, former Lord and Master of Kasterborous Towers. If he hadn't allowed to advertise on the K then I probably would never have worked with or met Jim and the site certainly wouldn't exist as it does today. So, thanks boss.