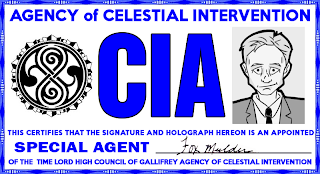 It's true you know, I've rarely seen any crossovers that have a lasting impact on either party. Most of the time it seems to get done mostly because it can. This particular cross over wasn't going to be much different initially, but the more of it I wrote the more I realised that this was going to serve as an introduction of a character the In Print Verse. I think you'll all be a little surprised by who it is, I know they caught me by surprise. Kind of. I mean I had been planning on adding them to the cast anyway, but I never planned on adding them in this arc, they just kind of shoved their way in. 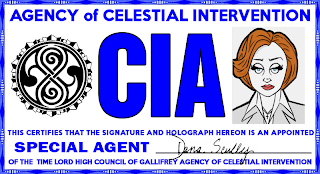 In the mean time I'd hope that I didn't have to introduce Agents Mulder and Scully to you. But I know their are slightly younger members of the audience out there, so let's just say they were the leads in 'The X-Files' (it's where the name came from for this arc) and that they were big in the 90s. If you haven't seen The X-Files then I'd strongly recommend you check them out soon. Vince Gilligan, creator of Breaking Bad, cut his teeth on this series. Just... go and watch it if you haven't already.

I've not made the Celestial Intervention Agency up incidently, they appeared on a semi regular basis in the Classic series and evolved into the Celestis in the EDAs. Quite when Mulder and Scully joined is a story for another day.

Do you like the ID cards that Jesse made up for Mulder and Scully? Hope so, because he's also produced a blank one for you guys to have fun with. It'll be up on our Facebook and Twitter pages later on today.

Right, I'm off now. See you all next week.