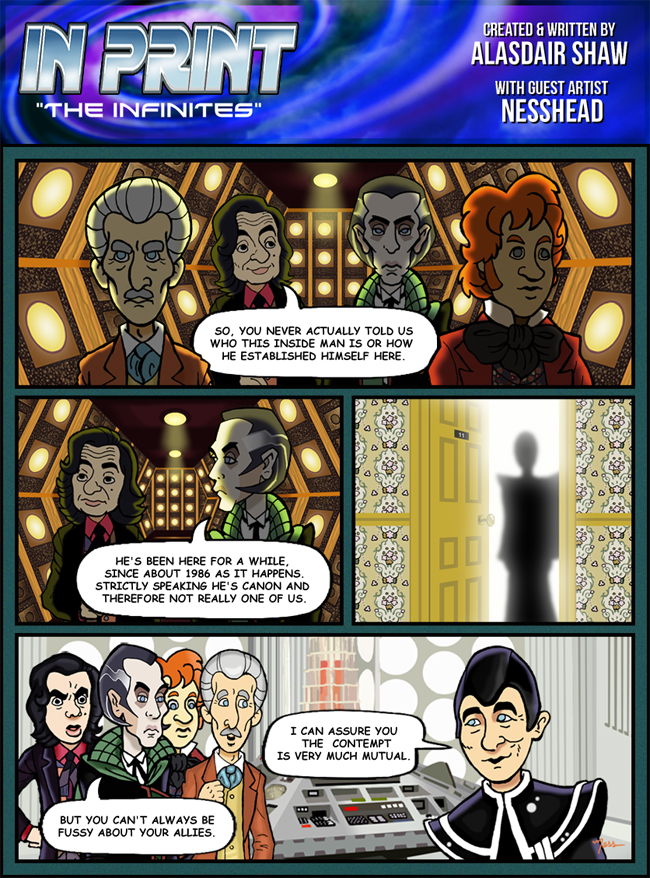 The Valeyard is canon you know, I'm not just making that up. The evidence is rather overwhelming; he appeared on the show itself after all. Indeed given that he was in every episode of Series 23 he's actually clocked up more screen appearances than Christopher Eccleston and Paul McGann put together. I've discussed this in more detail over at Kasterborous if you're interested.

Nesshead has actually met Michael Jayston, the man behind the robes, recently. Nesshead actually showed him a copy of this strip and the Valeyard himself pronounced it "Excellent". You have no idea how happy this has made us here at In Print Hall.

We've seen behind door 11 before during 'the Duel of the Time Lords' arc and I have to confess I enjoy the idea of The Valeyard hiding in plain site within the Doctor's own Post Temporal Psycho Construct. He sits so neatly between canon and non-canon that he just had to be The Infinite's contact within the Post Temporal Psycho Construct. He even has a Big Finish story al to himself, 'He Jests at Scars' is part of a wonderful little range called 'Doctor Who: Unbound'. Go and get a copy if you haven't heard it already, there's a link at the bottom of the page.

The Doctor returns tonight and I personally can't wait. They still insist on calling it Series 7b, but it's 8. I'm starting to get used to the idea that we're only getting half a series and a special in the 50th Yeat of the Doctor. Not happy about it, but getting used to it.

Our Twitter or Facebook accounts remain open, but please remember that I have three kids these days so the chance of watching it live are greatly diminished.....