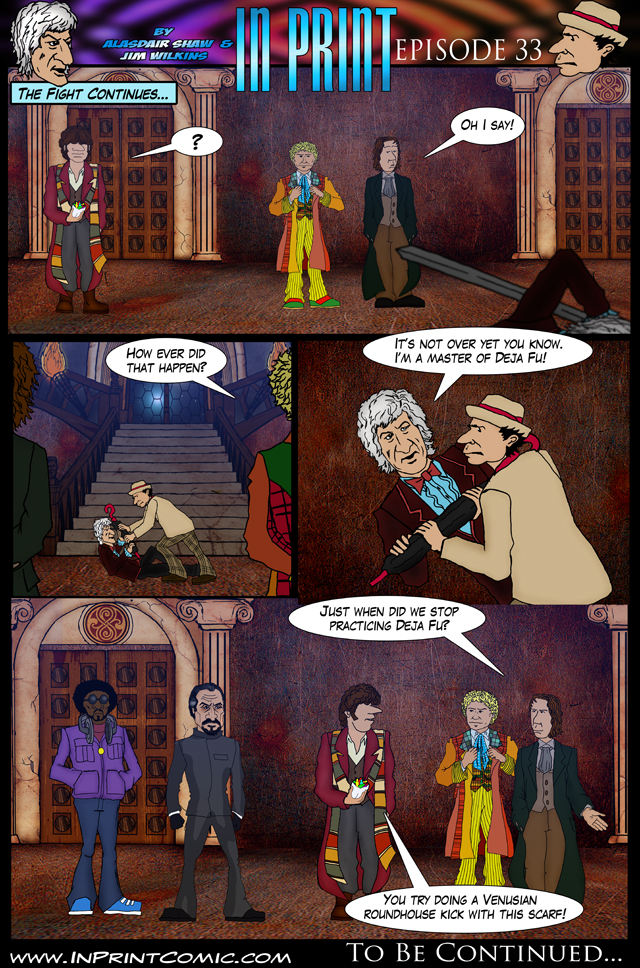 Surely I'm not the only one who has ever wondered about this? I know why it's the case; the 3rd Doctor era was very much a 70s action show. Every one knew Kung Fu in the 70s so it made sense the Doctor knew Deja Fu (I'm quite proud of that phrase).

Yet he seemed to forget all about it when he became Tom Baker. Just as well really, Tom doesn't strike me as a Deja Fu kind of guy. So in my head the canon reason became that scarf.

In other news I thought you all thought you were safe from new cast members since this wasn't an Infinity Doctors week didn't you? Well I'm sorry, but the In Print 'Verse is expanding. I can't really take credit for it, they seem to have taken on a life all of their own! Of course we've seen the Master before in what may, or may not, have been an out of continuity Guest Print. But the other guy is completely new to the In Print 'Verse and I'm looking forward to you all trying to work out just who he is and what he and the Master are up.

All will be answered in a fortnight.

Which brings us onto next week. As you may or may not of heard; Doctor Who is back on our tellys next week and as it happens 2nd Fade's second Prop Cupboard strip features a reference to Asylum of the Daleks so we're going to be running that instead and pretending we've had this planned for months. The Infinity Doctors returns in three weeks.

As usual keep an eye on our Twitter and Facebook feeds and we'll see you all again next week.